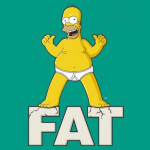 Two years ago this month I weighed just 7 stone and 1 pound. I’m over six foot tall so I had a waistline like a dehydrated supermodel. I’d been unable to eat normal food for some time, so I was being fed liquid food through a tube into my stomach, called a PEG. I found PEG feeding difficult to tolerate and could only manage about 1300 calories a day, which is why my weight had fallen so low. I’d also developed numerous chemical and vitamin deficiencies in my blood due to poor nutrition.

As I was in such poor shape and slowly getting worse I was admitted into the Royal London Hospital to be started on parenteral nutrition (PN), which is the process of feeding a person intravenously. It bypasses the digestive system putting nutrients straight into your blood stream. PN has some serious risks, including infection, blood clots and liver damage. But it was the only treatment option left for me.

I spent two weeks in hospital while my body adapted to the new way of being fed. From a combination of PEG feeding and PN I was receiving about 2000 calories a day. The dietitian warned me progress would be slow and suggested I should make a list of goals to try and achieve (besides not dying slowly from malnutrition 🙂 ). This is the list I wrote: 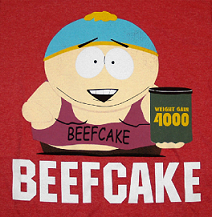 3, A longer break each day when I’m not attached to feeding pumps.

5, To be able to walk short distances.

6, To feel more relaxed about my health.

So two years on, how many of those aims have I achieved?

1, My weight has increased a lot from 7 stone. It peaked last summer at a rather plump 10 stone and 10 pounds (68 Kgs), a gain of 3 stone and 9 pounds! Unfortunately I had a spell in hospital over Christmas when I lost weight again, but I’ve regained some of that since. Currently I weigh a nice and healthy 9 stone and 12 pounds (62.6 Kgs). My Body Mass Index (BMI) has improved from 13.2, classed as ‘very severely underweight’ to currently 18.2, which is still underweight, but very close to ‘normal’.

I’m also a bit stronger. I’ve had regular skin calliper and strength tests which show I’ve gained some muscle as well as fat (mostly just fat though 🙂 ). – So as I’ve gained weight and strength I would say I’ve PASSED this challenge.

2, My blood is much healthier. It took nearly a year, but I’m no longer anaemic or low in any vitamins. Unfortunately I’m still slightly ‘pancytopenic’, which means I’m deficient in red and white blood cells and platelets. The problem has improved considerably and doesn’t give me any symptoms. The cause isn’t known, but I didn’t have the condition 5 years ago so it’s probably the legacy of several years of poor nutrition. Hopefully it will improve with more time. – PASS.

3, I do get a longer break each day when I’m not attached to feeding pumps. However some of that extra time is spent setting up my feeding systems, which can take two hours a day. So my free time is still very limited. – PASS (but only just).

4, Unfortunately my pain levels haven’t improved. If anything they’re worse. But I’m more active which probably explains why. I get pain from many joints in my body, which is annoying and often stops me sleeping. But it’s a common symptom of Ehlers-Danlos Syndrome and one you just have to live with. – FAIL.

5, I still can’t walk more than a few steps due to pain and weakness which is very frustrating. I do exercises twice a day and I’m currently trying new trainers in the hope they’ll extend my hypermobile toes less, and so cause less pain. Anything is worth trying, but I’ve been unable to walk for 5 years now and I’m not sure I’ll ever reach a point where I’m comfortable walking again. – BIG FAIL. Must try harder!

6, I do feel more relaxed about my health, very much so. It’s been one of the main benefits of PN. For 3-4 years my health was a daily concern for me and my family, with regular blood tests and careful monitoring of my weight. But I’m pleased to say things are pretty calm now. With PN you live with the constant risk of a blood infection, which can be fatal or cause lasting organ damage. So I can’t say my life is stress free, but I set up PN very carefully and so far, thankfully, I’ve avoided infection. – PASS. 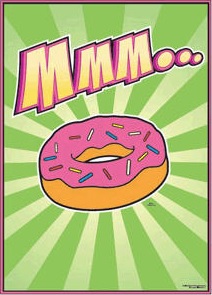 So… 4 out of 6 passes! That’s pretty good I think. Progress has been slow, so it’s been nice writing this post to remind myself how much things have changed. My health has improved in numerous ways, plus I’m able to get out more and generally have more of a life. Over the last week I’ve even been planning a holiday, which would be my first break for six years. There are a few obstacles to resolve and I’ll need to take a van load of equipment with me, but it’s feasible. Hopefully I’ll manage it in the next few months.

When I started PN it was on a trial basis, to see how my body would adapt. But it has worked so well I’ll be on PN for the rest of my life. I don’t expect to ever eat food again, but I’m used to it now and I don’t crave food like I used to (well apart from doughnuts, …and chocolate, peanut butter, ice-cream, waffles, curry, roast chicken, Golden Wonder chicken crisps, crispy duck, and Snickers bars. But who doesn’t crave them?)

Thank you to everyone who has helped me over the last few years, it’s all been very much appreciated. My health and weight are stable now and hopefully I’ll keep improving. Things aren’t easy for me, but I’m very grateful for the amazing medical care I receive which is keeping me alive.

Below is a chart showing how my weight has changed over the last two years. I find the chart very interesting, so it also shows I need to get out more. 🙂 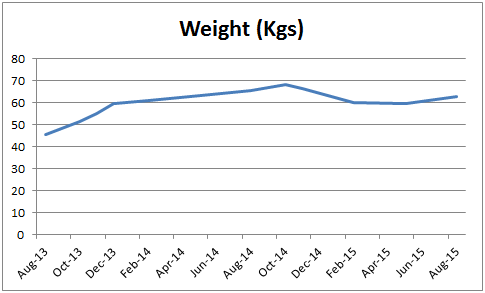 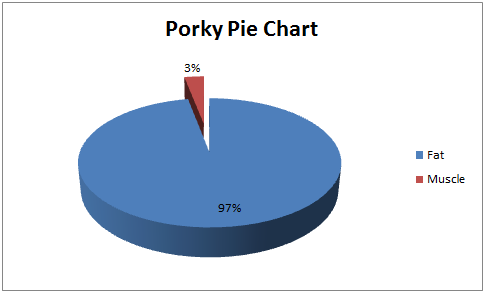