Twelve Days of Christmas …in hospital 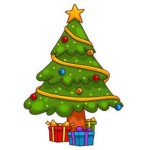 Sorry for the lack of updates recently. I did plan to do a couple of posts before Christmas but I got a little, er side tracked.

I’ve always really loved Christmas. Not just the day itself, but the preparation, the anticipation, singing along to The Pogues, decorating the tree, wrapping presents, the whole daft tinselly shebang. But in the build up to this last Christmas, rather than indulging my inner elf like I should have been, I was in hospital with a suspected Hickman line infection. Which is about as un-Christmassy as it gets.

If you’ve read the ‘Being Fed through Tubes’ section of My Story then you’ll know I can’t eat normal food, not even a little bit (if you haven’t read it, why not? Catch up!) Instead I’m fed partly through a tube into my stomach called a peg, but mostly through a tube called a Hickman line directly into my cardiovascular system, a process called parenteral nutrition.

As well as missing food a lot, every day I go through the tedious and meticulous process of setting up my peg and parenteral nutrition feeding systems. The parenteral nutrition in particular needs to be set up very carefully. Any germ in the system could cause septicaemia which can be fatal or leave lasting organ damage.

I’ve had a Hickman line for nearly 4 years without getting an infection. But a couple of weeks before Christmas I got a high temperature (38.6 degrees), which is the first sign of a Hickman line infection. I agreed with my GP to monitor my symptoms for 24 hours, but the next night I got another temperature over 38 degrees. I spoke to a doctor at the Royal London Hospital (RLH) where they manage my parenteral nutrition. His advice was to call an ambulance immediately and come to A&E at RLH where I would be admitted for tests, and I should have come a day earlier. Oops.

However when the ambulance arrived they wouldn’t take me to RLH. As it was an emergency they had to take me to the nearest A&E department, which for me is at Epsom Hospital. They suggested Epsom would probably move me on to RLH very quickly, but that didn’t happen either…

A blood test at Epsom hospital found my CRP level was 128. A normal result is below 5. (CRP = C-Reactive protein, which is a test of how much inflammation there is in your body). A CRP level of 128 suggests a significant infection somewhere in the body. If there was any chance I had a Hickman line infection I thought I should be treated at RLH who regularly handle such problems. But what I wanted didn’t seem to be a factor, so I was admitted into Epsom hospital where I only agreed to go for brief pit-stop.

Despite a rather farcical start, my eight day stay in hospital went pretty smoothly. I once spent six months as an inpatient at Epsom hospital. Thankfully I was put on Buckley ward where I already knew many of the staff, so I got to catch up with some old friends. Thank you all for making me feel very welcome (again), and for looking after me so well.

I was treated with IV antibiotics and over a few days it emerged the infection wasn’t from my Hickman line and was resolved with the antibiotics. I struggled with bad nausea during the stay, which was either a side effect of the antibiotics or the infection. I also had to have cannulas in my feet which makes moving around very awkward. I’ve had so many cannulas in my arms over the years my veins have become unusable, or as one doctor put it  ‘You’ve got veins like a junkie’. (A cannula is a hollow needle inserted into a vein to allow medication or fluid to be pumped in). So it wasn’t a fun week, but my trusty ipod got me through it. It only gets used during hospital stays, but 20 minutes of music can change my mood completely so it’s a vital companion in hospital. 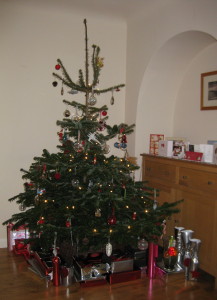 I arrived home on the Friday before Christmas. I still needed some rest but had a lot to organise. I’d like to say a big thank you to my sister and brother in law who bought me a tree and decorated it. Most of the presents I gave were ordered from my hospital bed via dodgy hospital wi-fi, but they were pretty well received. Crystal Ken didn’t arrive until Christmas Eve which was a worry. My youngest niece would have been very upset if Ken hadn’t shown up in time (so would Barbie!)

I had a party for my family during the evening on Christmas day. I didn’t have much time to prepare and half the food I ordered didn’t arrive, but no one seemed to mind. Like the whole day, the party was a little flawed but thankfully a lot of fun.

I wish I could end this post here, with a happy Christmas spent at home. But as I’m sure you’ve noticed the title of this post says twelve days in hospital and I’ve only described eight… Unfortunately a few days after Christmas I woke up with a temperature of 38.4 and couldn’t stop shaking. So I was straight back to A&E and spent four days in St Helier Hospital with a recurrence of the same infection (Epsom was full). – I was determined to get home on New Year’s Eve and the doctors happily discharged me, but I was back in Epsom Hospital within 24 hours where I stayed for another four days.

In all I spent 12 days in hospital over Christmas and another 4 days in the new year, all for a relatively minor infection. If I didn’t have a Hickman line I wouldn’t have been admitted into hospital at all. But needing to be very careful about any infection is part of life when you’re fed by parenteral nutrition.

So I had a frustrating Christmas to say the least. But hopefully in a few months I’ll have forgotten a lot about the days I spent in hospital and I’ll mostly just remember the lovely moments I shared with my family, particularly my young nieces.

Thank you for reading. A belated merry Christmas to you all, particularly bendy people like me. 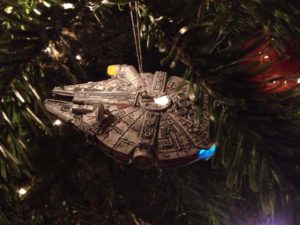 One of my illuminated Star Wars Christmas tree decorations. Not really relevant to this post, just very cool.