Could Nutritional Supplements Improve the Symptoms of EDS? 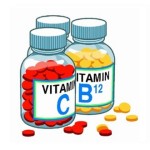 When I started building this website I looked carefully at the latest research into EDS as I wanted the information on the site to be as accurate as possible. I read many medical papers, some of them very interesting, some rather dull, but there was only one paper that really stuck in my mind. The paper proposes a simple treatment for EDS which might prevent symptoms getting worse and could even improve them, and it isn’t based on stem cells or gene therapy or any such advances which might not bear fruit for many years. The idea is based on nutritional supplements, which are widely available without prescription. You probably have some in your home already.

The paper is titled ‘A Novel Therapeutic Strategy for Ehlers-Danlos Syndrome based on Nutritional Supplements’. It was published in 2005, by Dr D. Mantle, Dr R.M. Wilkins and Professor V. Preedy. You can read the paper in full, for free, by clicking HERE.

The strategy is based on:

1, Increasing scientific evidence that nutrition may be a major factor in the development of many disorders once thought to result from defective genes alone.

2, The recognition that many of the symptoms associated with Ehlers-Danlos Syndrome are also characteristic of nutritional deficiencies.

3, The combined effect within the body of appropriate nutritional supplements in promoting normal tissue function.

The authors of the paper formed this hypothesis:

‘The symptoms associated with Ehlers-Danlos Syndrome may be successfully alleviated using a specific (and potentially synergistic) combination of nutritional supplements… at dosages which have previously been demonstrated to be effective against common symptoms of EDS in other disorders.’

In conclusion, the paper states that the combination of nutritional supplements they suggest are designed to counter the symptoms associated with EDS, namely skin and vascular problems, musculo-skeletal problems, cardiac mitral valve prolapse and periodontal disease.

The paper is interesting and persuasive, but could an effective treatment for EDS really be as simple as nutritional supplementation? I was very intrigued by the paper, so I started taking it to hospital clinic appointments to ask my doctors view of the idea. I was expecting a negative possibly even dismissive response, but every doctor I showed the paper to responded positively. I can’t give his name online but one doctor described Professor Victor Preedy, one of the writers of the paper, as ‘Very well known and respected’. So I decided to write to Professor Preedy and his co-authors. I was very interested to know if the nutrition supplement strategy had ever been clinically tested, and what the outcome was.

Unfortunately I have been unable to contact Professor Preedy. At the time the paper was written he was working in the Department of Nutrition and Dietetics at Kings College London. Professor Preedy may now have retired. However I have received responses from his co-authors. Dr Richard Wilkins was working in the School of Biology at Newcastle University when the paper was written. Dr Wilkins is now retired, but commented that he is unaware if a clinical study has ever taken place, and added that “Our approach in our earlier work was to explore the biological mechanisms and potential of medicinal plants (especially those with anti-oxidants) rather than evaluate clinical aspects.”

Dr David Mantle was working for Pharma Nord (UK) ‘a manufactuerer of dietary supplements and natural medicine for prevention’ at the time the paper was written, and is still employed by the company. Dr Mantle stated that no clinical study of the supplement strategy was carried out, but made a number of very helpful comments:

“The Medical Hypotheses paper is self-explanatory as to the rationale for the supplementation regime proposed, i.e. that supplements documented to provide significant symptomatic benefit in other disorders (e.g. glucosamine for joint pain in osteoarthritis) may provide similar benefit at similar dosage for similar symptoms in EDS. A disadvantage of this approach is that because EDS has so many symptoms, this would involve patients taking a large number of tablets / capsules (at least 14) per day, as well as the monetary expense involved. On this basis it may be better for individuals to focus on their most problematic symptoms e.g. glucosamine / chondroitin / MSM / silica for joint pain.”

“There is another way of looking at the issue of nutrition in EDS. Concerns are increasingly being raised about the potential problem of dietary deficiencies in the UK population as a whole, which presumably could also affect EDS patients, particularly those with gastrointestinal malabsorption issues. It has been estimated that more than 50% of the UK population are deficient in vitamin D due to insufficient sunlight exposure. The question therefore arises that if an EDS patient has, for example, muscle weakness / pain or fatigue, how much of this is due to the underlying EDS disorder and how much to dietary deficiency? If EDS patients ensure they are taking adequate amounts of these nutrients, they can at least ensure that their symptoms do not result from dietary deficiency. ”

“The next issue is whether nutritional supplementation at high levels might benefit symptoms caused by the underlying EDS, as opposed to dietary deficiency as above. For example, the recommended daily intake of vitamin C to prevent dietary deficiency is 60mg per day, whether vitamin C intake at higher doses (e.g. 750mg per day) may boost collagen production in EDS is open to question. There have been no documented clinical trials to date, but there have been a few case reports that high dose vitamin C can improve the clinical status of patients with impaired lysyl hydroxylase activity.” (ref) (ref) (ref) (ref).

“Gastrointestinal complications associated with Ehlers-Danlos syndrome are common and also need to be considered. These typically include abnormalities of smell or taste, difficulty chewing or swallowing, abnormal gastric or intestinal transit times and intestinal malabsorption. In particular, malabsorption resulting from collagen related structural defects of the small intestine may exacerbate deficiencies of key nutrients in the normal diet in Ehlers-Danlos patients. These problems may be compounded by physical difficulties in preparing nutritious meals or outdoor access (potentially leading to lack of vitamin D). Ehlers-Danlos patients deficient in recommended nutrients (which can be established via appropriate blood tests) may require significantly higher daily doses.”

“On a final note, the issue of product quality and bioavailabilty of nutritional supplements is often overlooked. Because supplements are not regulated in the same way as prescription medicines, levels of active substances may be deficient, and of poor bioavailabilty. Many clinical studies have undoubtedly failed because of this. To be effective, you should always choose a supplement manufactured to pharmaceutical standards, and with documented bioavailability.”

I have also sent the nutritional supplements paper to several doctors considered to be specialists in EDS to ask their view of the idea. To date I have only received one reply. I can’t give the doctors name online, but he/she described the paper as ‘Interesting, but untested’.

No clinical research study has ever been performed to assess the possible benefits of nutritional supplements for people with EDS (ref). The Ehlers-Danlos National Foundation, the largest EDS charity, recommend EDS patients take 2-4 grams of vitamin C per day. They comment ‘We find that ascorbic acid (vitamin C) is a big help with the bruising and in many cases, has improved wound healing and muscular strength. Recently, we have learned in the laboratory, that Vitamin C instructs the body to make collagen.’ (ref). EDNF also gives advice about the importance of magnesium via their Professional Advisory Network (ref). So EDNF agree, at least in part, with the strategy in the paper, ie. that nutrition supplements could be beneficial. An article by Dr Nigel Burrows on the Ehlers-Danlos Support UK website discusses the use of vitamin C, but stops short of recommending it due to the lack of scientific testing (ref).

There is cutting edge research being done into treatments for Ehlers-Danlos Syndrome, but the simple idea of nutritional supplements appears to have been largely overlooked. This seems to be a shame. Nutritional supplements are widely available, relatively inexpensive and well tolerated. There are persuasive arguments they could be of real benefit to people with EDS, but we have no clinically obtained data to base decisions on.

My aim in writing this article is not to encourage everyone with EDS to start taking numerous supplements every day. Instead I want to draw attention to this simple idea and hopefully encourage someone or some organisation to clinically assess the strategy. I will be sending copies of this article to EDS charities, relevant doctors and hospitals. I will update this article with any progress!

Please remember I am not a doctor.

I sent this article to Professor Qasim Aziz, a neurogastroenterologist at The Royal London Hospital. He told me he’d observed many of his patients improve after making certain dietary changes. He wanted to do a clinical research study into the benefits of nutrition on EDS, but lacked the funding. I challenged my father to raise the money and we formed a fundraising group with EDS UK and The Ehlers-Danlos Society. We recently launched the 12-24 film. You can read more about our project by clicking HERE.

Since I wrote this article the US based charity EDNF has become The Ehlers-Danlos Society. They have a new website and two articles I linked to above are no longer online. However, they now feature a very helpful article about the benefits of magnesium for people with EDS by Dr Heidi Collins (ref).

The charity EDS UK also recently launched a new website and an article I linked to above is no longer online. However they now give some general healthy eating advice and mention the use of supplements in an article by Jenny Morrison, a neurogenetics research nurse, about managing fatigue (ref).

At the 2017 EDS UK / HMSA conference Lisa Jamieson gave a fascinating talk titled ‘Why Nutrition is Important’, which you can view HERE.

« An article for the PINNT Newsletter » Dem Bone Scans – Update