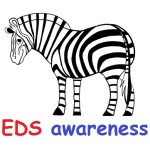 May is Ehlers Danlos Syndrome Awareness Month, which is a worldwide promotion supported by all the EDS charities.

This year EDNF (Ehlers Danlos National Foundation, a U.S. non-profit organisation) has launched a video contest for people with EDS to share their stories. Entries should start appearing soon on YouTube with the hashtag #EhlersDanlosStories and on their Facebook page.

The HMSA (The Hypermobility Syndromes Association) is promoting their popular ‘Do A Mile for EDS Awareness Month’ campaign for a second year. It challenges members to complete a mile, or many miles, in any way they like: walking, swimming, skipping, cycling, …on a camel. You have a month to complete the challenge, with prizes for the most distance achieved and the most unique method used. Details can be found on their website.

Ehlers-Danlos Support UK has challenged their members to make a pledge for change ‘using social media to raise our voices and be counted’ (#myEDSpledge). Common pledges include: telling 10 people about EDS, holding an awareness event, fundraising, or wearing zebra patterned clothes or accessories. Details are on their Facebook page.

So what am I doing? What’s my pledge? Surely a guy who writes a blog about EDS aiming to raise awareness would be very involved in this?! Well to be honest I’ve been a little slow off the mark preparing for it, but this is my EDS pledge:

‘I pledge to tell 10 people about EDS, write to my local MP (after the imminent election when we know who is running the country), and er, something else, I’m not sure what yet, I have a couple of ideas.’

Like it? Catchy isn’t it?! Watch this space to see how I get on…

Doctors use the term ‘zebra’ in reference to rare conditions and it’s slowly been adopted by the EDS community across the world as EDS is considered a rare condition. You often see zebras or the zebra pattern on printed material and websites about EDS.

So EDS Awareness month is now over and I completed my pledges. I wrote to Sir Paul Beresford, MP for Mole Valley, asking what plans the new government has for raising awareness of EDS and encouraging and funding research towards a cure. Any reply will appear on this site. I also went into my local town and handed out a pile of EDS-UK leaflets. Some people were very friendly, others a little grumpy, a couple rather rude, but hopefully it achieved something. A friend who works as a teaching assistant told her tutor group about EDS and they all tried the Beighton Score test. A few showed signs of hypermobility, but thankfully none were concerned they have EDS. Thank you friend.

I spent quite a lot of time on another idea I had to raise awareness, but with limited success (limited meaning zero 🙂 ). But I’ll keep trying with it. If living with EDS teaches you anything, it’s perseverance!