Allergy testing has been on my ‘to-do’ list for about 20 years. I’ve always suspected that I’m allergic to pollen and maybe milk too. When I was able to eat I used to avoid dairy products as they made me feel ill, and in my youth I was regularly prescribed an inhaler for hay fever. I didn’t qualify for allergy testing through the NHS. I considered being tested privately, but I’ve had higher priorities to deal with over the years. I’ve also read several reports that the results of allergy tests can be unreliable.

There are three types of allergy test: a food challenge test, a skin test or a blood test. A food challenge test involves eating a small amount of the suspect food in a controlled setting such as a hospital, so any reaction can be treated. A skin test exposes your skin to an allergen and is then observed for signs of a reaction. Blood tests measure for IgE levels (immunoglobulin E antibodies), which are the antibodies that trigger food allergy symptoms. Both skin and blood tests are criticised for sometimes giving false positive results. Food challenge tests seem to accepted as the most accurate, but they’re also the most time consuming and can make a person feel ill.

In the last few months I’ve been trying to optimise my nutritional intake using supplements. I’ve also been considering switching to a soya based PEG feed. My current feed is dairy based. It has the lactose removed, but I’m curious as to whether it could still be causing me problems. So I thought it might be helpful to finally get tested for allergies. A quick google search led me to Dr Adrian Morris at Guildford Nuffield hospital. Dr Morris charges £200 for a half hour appointment. So it’s not cheap, but nothing ventured…

Dr Morris uses skin testing, which is a pretty simple process. He wrote the initials of the substances he would test for on the inside of my lower arm, which is apparently a sensitive area of skin (see below pic). He then put a droplet of fluid containing each test substance in the appropriate area, then lightly scratched my skin through each droplet. Dr Morris also carried out the same process using a droplet containing histamine, which is a chemical your immune system makes when it encounters a substance you are allergic to. Histamine is used in skin prick tests to show how your body reacts when it encounters an allergen, so other tests can be compared to it. A ‘control’ test is also performed using sterile water instead of histamine.

Dr Morris tested my body’s response to over twenty different substances in two different categories. He tested for common inhalant allergens including dust mite, cat dander, and tree and grass pollen mixes. Dr Morris also tested for common food allergens such as cow’s milk protein, egg, soya and peanut. Once the tests were performed I just had to wait a few minutes to see how my body reacted.

My response to the histamine test was a 3 mm wide red lump. I was expecting to see allergic reactions to pollen and maybe cow’s milk, but that’s not what happened… Only one other red lump formed on my arm, which was 5mm wide. It showed in Dr Morris’s words ‘a modest degree of reactivity to house dust mites’. But that was it! I showed no sign at all of allergy to pollen or milk. Many people with EDS struggle with wheat, but I showed no reaction to wheat either.

The results left me with a few questions. Did I grow out of hay fever (pollen allergy) or perhaps I never really had it? I consistently reacted badly to dairy products from the age of about 20 onwards. I asked Dr Morris why the skin test didn’t show an allergy to milk protein. He was unsure, but speculated that my adverse response to dairy products might not be due to an allergy, but instead could be caused by my malfunctioning digestive system (ie. due to EDS). It’s also possible I am ‘lactose intolerant’ which means my body doesn’t produce enough of the enzyme which digests lactose. This is a different condition from an allergy and can be tested for using a breath test that detects hydrogen levels after consuming a dairy product.

There is also an unknown factor to consider. I haven’t eaten normal food for 7 years. Could such a long period of my body not encountering substances such as wheat or lactose (milk protein) have altered my immune systems response to them? It’s plausible my body has become less sensitive to some allergens due to lack of exposure.

The test did show an allergy to dust mites, which is very common. I’ve done a little research since and I regularly experience symptoms often caused by dust mite allergy. I also spend a lot of time in bed, which is apparently one of their favourite habitats! So I’m going to invest in some anti dust mite bed linen and see if I feel any better.

My experience of skin allergy testing was interesting and gave surprising results. It’s an expensive test to have done privately and I learnt less than I hoped to, however I still think it was a worthwhile process. A soya based PEG feed is worth trying as this test showed I’m not allergic to soya, whereas I know dairy products are a problem for me, whatever the cause. Hopefully I’ll get some benefit from anti-dust mite bed linen, plus I’ve managed to tick off another box in my search to find something that improves my EDS symptoms. 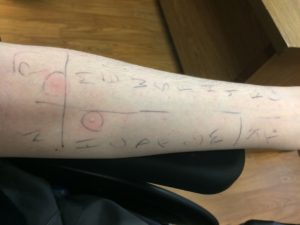